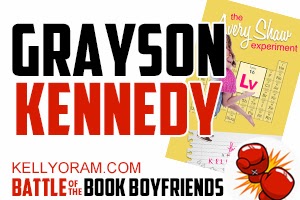 Comment on this blog post to win an autographed poster of The Avery Shaw Experiment. Winner chosen randomly and announced during the BotBB Facebook party Sun. Feb. 16th! (Giveaway is international)

Name: Grayson Kennedy
Hair: Blonde
Eyes: Blue
School activities: Varsity Basketball
Likes: music, movies, parties, clubbing, dancing, sports (watching and playing)
Favorite Food: Burgers and fries
Favorite Music: hip-hop, R&B, anything with a decent beat
Favorite Movie: The Hangover
Favorite Phrase: In the name of science!
Why we love him: Grayson Kennedy is larger than life. When he walks into a room, he owns it. He’s lovable and charming and oozing with self-confidence. His overabundance of personality may be a bit overwhelming and exhausting at times, but no one understands girls like Grayson, and he’ll use that knowledge to pull you out of your shell. Underneath all the perfection he hides a secret streak of vulnerability, and needs to feel useful and needed. He’s your classic modern-day knight in shining armor, so give him a chance to rescue you ever now and then and you’ll never regret it.
You Can Quote Me On That:

When a girl lets you be the one to hold her as her entire world falls apart, even though you’re ass naked, it changes the way you see her.

“But you’ve taken me out like a million times for the experiment. You kissed me once in the name of science.”

Avery chewed her bottom lip. I was going to have to talk to her about that habit because every time she did it, it got harder and harder for me not to kiss her. One of these days I was not going to be held responsible for whatever actions I was driven to.

“Somewhere between the shower and the Red Bull I fell in love with you, Aves. I’m talking epically. There is no coming back from a fall like mine.”

The Man In Action:
I tried to copy their movements, but I felt like some kind of bobble-head whack-a-mole doll. There was no way what I was doing was considered dancing. My panic started rising, and I stopped moving. “Maybe some people just aren’t meant to do this.”
As I complained, someone stepped up behind me and I felt a pair of hands grip my upper arms. “You’re overthinking it.” Grayson’s low, soft voice sent shivers up my spine. His hands slid up my arms to my neck, and then he buried his fingers deep in my hair, massaging my scalp. “You need to loosen up.”
Slowly he pushed my head forward, rolling it from side to side until he brought it back to rest on his shoulder. He rubbed my shoulders next and then slid his hands down the entire length of my arms, leaving a trail of goose bumps where his fingers brushed along my skin.
I gasped at the sensations he was causing in me, and my eyes fluttered shut. He began to sway slowly, and my body, having melted into complete mush, matched his movements with more grace than I’d ever managed in my life.
“Dancing,” he said, “is about feeling, not thinking.”
Grayson lifted one of my arms above my head and rested it on the back of his neck. My fingers instinctively dug into his soft, thick hair. I hadn’t told them to do that. I felt Grayson’s cheek lift into a smile against the side of my head, as if he fully approved of my actions.
“Now we move together.”
His arm came around my waist, and he suddenly knocked his knee forward into the backs of mine, forcing them to unlock. Unprepared for the shift in weight, I buckled, but he’d been ready for this. He caught me, held me up tight against him, and began moving us in an almost-circular motion.
My entire body heaved a shudder of pleasure, and then I drifted away from reality into a world where nothing existed except for the two of us.
Grayson moved artfully, seductively, to the music until I felt like we were one and the same with the beat. I had never experienced anything like it. I don’t think I could have even imagined anything like it.
My body burned everywhere it was pressed against his, and every other part of me yearned jealously for the same feeling. I felt so relaxed I could almost sleep, and yet my heart pounded wildly in my chest.
“You’re doing it, Aves,” Grayson whispered against my ear. His breath caused more shivers to explode through me. “You’re a natural.”
“I’m not doing anything.” I sounded dazed and a bit breathless. Probably because I was dazed and breathless. “You’re doing this. I’m just letting you.”
Grayson laughed low and dangerous. “The guy is supposed to lead, but he’s only ever as good as his partner.”
His lips touched my neck just behind my ear, and it felt so good I let out a barely-audible whimper. His entire body tensed in response. “Aves,” he whispered in a strangled voice, “I want to kiss you.”
My mouth responded before my brain had even processed his words. “I’ve never been kissed before.”
Suddenly I was facing him, my hands resting lightly on his chest, his hands on my hips holding our bodies together in ways my mother would disapprove of. It was like the shower all over again except nowhere near as innocent. In fact, it wasn’t innocent at all. I had to fight the urge to climb up him and wrap my legs around his waist.
Grayson stared down at me as if he was stranded in the Sahara and my lips were the last drops of water in his canteen. “I know,” he said. “I want to be your first. Right here. Right now. Tell me it’s okay.”
His mouth was right there. His chest heaved as if his lungs were fighting for oxygen. His heart pounded beneath my hand. I could feel his need for me, but what surprised me was the intensity of my own desire. I wanted him to kiss me. With every fiber of my being I wanted his mouth on mine. I ached for it.

Want more Grayson?
I know you've already read half a book from Grayson's point of view in The Avery Shaw Experiment, and got a peek in his journals during the Avery Shaw Diaries blog tour, but can you really ever get enough of Grayson Kennedy? He certainly doesn't think so. Grayson's Science Club days may be over, but that doesn't mean he's finished with Avery Shaw! If Grayson is crowned king of the book boyfriends, he's promised to share with you a short story from his college days. College life is demanding on his time and he doesn't get to see Avery near as often as he'd like, but that just means the time they do get to spend together has to be that much more epic.

The Avery Shaw Experiment is on sale now through the end of the Battle of the Book Boyfriends for just $.99 on AMAZON & Barnes&Noble.