I know I'm a little late getting this up today--busy morning--but here it is! 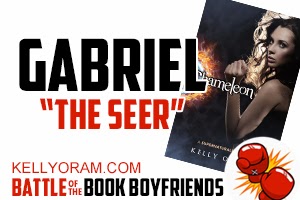 Comment on this blog post to win an autographed poster of Chameleon. Winner chosen randomly and announced during the BotBB Facebook party Sun. Feb. 16th! (Giveaway is international)

Name: Gabriel (AKA The Seer)
Hair: black
Eyes: dark brown
School activities: tutored privately
Likes: Classic literature, poetry, Shakespeare, theater, they symphony, art, New York City, and tattoos
Favorite Food: Thai
Favorite Music: classical
Favorite Movie: never seen one
Favorite Phrase: “God, grant me the serenity to accept the things I cannot change, The courage to change the things I can, And wisdom to know the difference.”
Why we love him: This Shakespeare-quoting lover of classical music isn’t afraid to talk about his emotions. Gabriel’s power has forced him to be a little mature for his age. He’s even tempered, kind and a little shy, but he doesn’t lack self-confidence. This sophisticated, respectable guy may be a bit naïve to the ways of the world, and will never really be the life of the party, but he knows the proper way to treat a woman. You’ll never feel as safe or special as when Gabriel takes care of you.
You Can Quote Me On That:

“Truly, you are a miracle.”

I’ve never been one to take a compliment gracefully so I said, “You only think that because you haven’t seen enough of my temper.”

“Actually it is your temper that most attracts me to you. Though I believe spirit is a better name for it.”

“Do you really believe what the council says—that you are the love the prophecy speaks of who is supposed to keep me from choosing evil?"

Gabriel was quiet for so long I didn’t think he was going to answer me. “That I do not know,” he finally said. “But I will help you nonetheless because you are the Chosen One and I have faith in the Creator. I have faith in you.”

“I do not imagine anyone ever being able to give you up. I surely could not now that I have found you.”

“Line?” Gabriel asked, surprised. “Is that to say you believe I am not being serious?”

“You are a strange boy.”

I looked down at Gabriel’s sleeping figure and whispered the words, “Wake up.”

It took a moment, but the color rose to Gabriel’s cheeks and his eyes fluttered beneath their lids.

“Gabriel, wake up,” I said again and kissed his lips lightly.

Gabriel’s eyes didn’t open but his lips turned up into a smile. "It is my soul that calls upon my name: How silver-sweet sound lovers' tongues by night, like softest music to attending ears."

“Good afternoon!” Gabriel chirped brightly when I came stumbling from the bedroom.
“Is it really afternoon?”
“You needed the rest. How do you feel?”
“I’m starting to feel more normal,” I admitted. “I mean, not—the cravings are still there, but it feels more like before I came here.”
“Good.” Gabriel held out his hand. I came to him and he put my palm to his face. “You do feel stronger,” he told me. “And I am glad for it because I have a surprise for you.”
“A surprise?” I asked confused.
Gabriel beamed at me. “Go get showered and dressed, and—” He hesitated, then blushed as he asked, “If it would not be too much trouble, could you do whatever it is that you do to your hair that keeps it from looking like that?” He pointed at my head.
“Straighten it?”
Gabriel’s glossy eyes sparkled with mischief. “You are always beautiful, but I am very partial to the way it looks when it is tamed.”
I was startled by his attempt to be playful. I hadn’t realized he could be anything but serious. “Are—are you trying to flirt with me?” I asked.
Gabriel knitted his eyebrows in confusion. “Flirt?”
“Never mind,” I said.
“I am excited, Danielle.” He was more than excited. He was giddy. “I have been waiting hours for you to wake. Please hurry or it will become dark and your surprise will be ruined.”
“All right, all right.” I laughed, and headed back toward the bathroom in somewhat of a daze.
“You may need a sweater,” Gabriel called to me.
Gabriel’s face brightened when I finally immerged, dressed and ready to go with my hair as straight as I could get it. I would have blushed except he was literally bouncing with anticipation.
“So,” I said. “What kind of surprise are we talking about?”
“I was thinking of what you said, about how humans choose their own mates. I asked the Councilor about it this morning and he explained what you meant when you said ‘they date.’ You meant courtship right?”
“That’s totally a word my great grandma would use, but yeah. Dating is basically like courting. Why?”
“Because I wish to know you better as well. I understand this will be doing things a bit out of order, but, Danielle Webber, I would be honored if you would go for a date with me.”
Gabriel’s smile was infectious and I giggled at his phrasing. “What exactly did you have in mind?” I asked.
“Picnics seem to be traditional, are they not?” Gabriel proudly held up a basket. “City Hall Park is right across the street.”
“You mean they let you go outside?”
“Of course,” the Supreme High Councilor said, having come through the front door without knocking. Duncan followed behind him.
“Duncan!” I squealed and ran at him. “I wasn’t sure I’d ever see you again.”
Duncan returned my hug with a smile, but his eyes were taking in the sight of me like he was trying to convince himself I was real. “Are you okay?” he asked in a hushed tone.
His worry stalled my playful mood. “I’m getting better.”
“And the Seer is being good to you?” He glanced at Gabriel with a hint of malice. “Not trying anything…ungentlemanly?”
“Gabriel?” I stifled a laugh. “I’m not sure he would even understand the meaning of ungentlemanly.” Duncan looked so skeptical that I laughed. “I like Gabriel very much,” I admitted. “He’s really helping me get through this. I promise you don’t need to worry. But I am so happy to see you.”
Behind us, the Councilor cleared his throat. “You really should get going if you’re to have any daylight for this picnic of yours.”
“You’re really going to let us go outside?”
“Of course, child, I am not a tyrant.”
I couldn’t help muttering, “Could have fooled me.”
The Councilor pretended to ignore me, but I know he heard because behind him Duncan winked at me.
“Gabriel and I often explore the city,” the Councilor said. “He has only stayed indoors so long because he refused to leave your side. You do understand, of course, that we must take precautions. You cannot just come and go as you please. You may never go out without me, as I am the only warlock in the consulate who has the power to cast a cloaking spell strong enough to hide your auras. The two of you have far too many enemies. That is why we will also be bringing along your guardian. Duncan and I will try to give you your privacy, but you must respect my rule that you are to stay close by at all times.”
“Of course, sir,” Gabriel said.
I’m pretty sure it wasn’t for Gabriel’s sake we were being read the riot act.
I couldn’t get over my attitude with the Councilor, even if he was letting me go outside. “Chaperones,” I said sarcastically when he looked to me for a confirmation that I understood the rules. “Awesome. And I thought my dad was going to be tough with the dating issue.”
“Danielle,” he said. He gave me a stern look.
“Yeah, yeah, freedom but not really. I get it. It’s not like I could outrun you guys anyway, so lead the way.”
I was glad to see I got under the Councilor’s skin, but he managed to keep his temper and walked out the door. Gabriel started to follow but I stopped him. “If you’re trying to go for an authentic human date, a gentleman would offer the lady his arm.”
“Offer it how?”
He watched with fascination as I lifted his elbow and tucked my hand into his arm.

Want more Gabriel?
Gabriel may be the type of guy to normally stand strong and silent in the background, but just because he's quiet doesn't mean he's not full of thoughts. We know Dani had quite the adventure in Chameleon, but in a way everything was just as crazy for the lovable, sheltered Seer. If Gabriel is crowned king of the book boyfriends, I'll write a compilation of my favorite Gabriel scenes (and possibly a scene or two that weren't in the book) from Chameleon and you'll finally get a better idea of what Gabriel thought of the hurricane of a girl who burst into his life kicking and screaming, and what it was like to fall in love for the first time.

Chameleon is on sale now through the end of the Battle of the Book Boyfriends for just $.99 on AMAZON & Barnes&Noble.