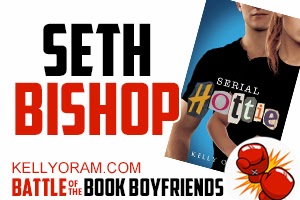 Today's Giveaway (1 of 2)
Comment on this blog post to win an autographed poster of Serial Hottie. Winner chosen randomly and announced during the BotBB Facebook party Sun. Feb. 16th! (Giveaway is international)

Name: Seth Bishop
Hair: dark
Eyes: blue
School activities: homeschooled
Likes: Boxing, UFC, Crime novels, skateboarding, video games, luxury cars, redheads
Favorite Food: Sushi
Favorite Music: indie and punk rock
Favorite Movie: Silence of the Lambs
Favorite Phrase: “Oh, Ellie!” (This is accompanies with a sigh and a shake of the head)
Why we love him: There’s something mysterious and even dangerous about Seth Bishop that sets your heart racing. He’s volatile and unpredictable but you know he’ll always be there whenever you need him—he has a protective streak that can’t be matched. He’s a bit socially awkward and doesn’t always say the right thing. His quirks make him vulnerable and even a little insecure, but accept him the way he is, embrace the flaws that make him unique, and he will cherish you forever. This bleeding heart romantic is just dying for a girl to give his whole heart to.
You Can Quote Me On That:

"You make me uncomfortable," I blurted before I could stop myself.

"Because of the intense attraction between us,” Seth said, one hundred percent serious. “That's natural."

"Angela just sees what you can't for some reason," he said.

The corner of Seth's mouth pulled up into a smirk and he turned, angling his body toward mine in the booth. "That it's only a matter of time before I get what I want."

“If he needs Angela to point out to him how special you are, then he doesn’t deserve you.”

Seth took my face in his hands. “I’m going to kiss you now,” he warned me, his whisper so smooth it gave me goose bumps. “You may not like it, but I’m afraid it has to be done.”

I couldn’t keep the smile off my face. This was so not the way I’d imagined introducing myself to her, and yet, somehow, it seemed appropriate that our first meeting involved weapons and a lot of blood.

Serial Hottie is on sale now through the end of the Battle of the Book Boyfriends for just $.99 on AMAZON & Barnes&Noble.