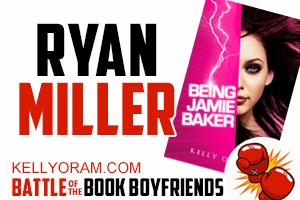 Today's Giveaway! (one of them)
Comment on this blog post to win an autographed poster of Being Jamie Baker. Winner chosen randomly and announced during the BotBB Facebook party Sun. Feb. 16th! (Giveaway is international)

Name: Ryan Miller
Hair: blonde
Eyes: blue
School activities: Varsity Footabll (quarterback), Homecoming King
Likes: hanging out with friends, movies, water sports, and he secretly likes doing yoga with his mother, though he denies it even to himself.
Favorite Food: Pizza
Favorite Music: Top 40 Pop
Favorite Movie: The Jason Bourne movies
Favorite Phrase: “Look on the bright side…”
Why we love him: He’s charming, confident, laid back, unnaturally optimistic, a little bit cocky, and a little bit corny. Ryan Miller is the most laid back, easygoing guy you’ll ever meet. This genuinely nice guy is unnaturally optimistic. He’s charming, confident, gorgeous, and has a knack for always getting what he wants. What’s his secret? Optimism and tenacity. He may be a little corny at times but he’s never short on affection. Ryan Miller will make you feel like the sun rises and sets with you.
You Can Quote Me On That:


“Did you ever consider the possibility that I’m not interested? That maybe I just don’t like you that way?”

Ryan looked at me like I’d just said the impossible. “What’s not to like?”
~Being Jamie Baker


“Hey, I can’t be good-looking and a genius. Wouldn’t want all the girls in school to fight over me or anything."

“Oh please! They all do that already, and you know you love it.”

“Okay, fine, maybe I do.” Ryan chuckled. But then his face became completely serious. “But it’s really frustrating that the one girl in school who doesn’t need to fight for me won’t even get in the ring.”

Okay, he did not just make me blush with a lame sports metaphor. What is wrong with me?~Being Jamie Baker


“I’ve known I was ready to spend the rest of my life with you for a long time, Jamie. I was only waiting for your stubborn butt to realize it, too.”~More Than Jamie Baker


“Word of advice? Don’t disappoint Jamie. It can be hazardous to your health.”

“Hardly. Jamie’s way too smitten to ever be disappointed in anything I do.”~More Than Jamie Baker

I tried to smile appreciatively, but I don’t think I accomplished it, and things got really quiet. Awkwardly quiet this time. Thank goodness Ryan’s unusually perky because he successfully changed the subject and managed to bring back the light mood as well. “So, tell me what it feels like to be crowned since now, thanks to you, I’ll never know.”
Two seconds ago I was wallowing in the memory of the single worst moment of my life, and here, with one little comment, Ryan had me smiling again. How does he do that?
I didn’t exactly know how to answer his question, so I went to my closet, pulled the stupid tiara from the old shoebox I kept it in, and joined him on the bed again. “It feels kind of like this,” I said, and placed the crown on his head.
Ryan feigned a look of surprise and wiped away fake tears as he spouted thank-yous to an imaginary audience. When he tried to wave, though, I absolutely had to step in. “No, no, no, no! A beauty queen is all about poise and grace.” I sat up very straight as I proceeded to show him the trademark Miss America wave.
“All I need is the dress,” Ryan said as he diligently tried to copy my perfect wave.
He looked so ridiculous that I actually burst out laughing. It was the first time I had laughed an honest-to- goodness laugh since the accident, and it felt surprisingly good. “That can be arranged,” I said.
“You still have the dress?”
“It’s a gown, and yes, it’s hanging in the closet.”
“Well, what are you waiting for? Go put it on. I want to see Miss Sweet Corn in all her glory.”
It was the strangest thing, but I was actually having fun for the first time in I don’t know how long, and when Ryan asked me to put my dress on, I didn’t even think twice about it. I grabbed the dress, dashed into my bathroom, and came back a few minutes later in the baby blue silk that won me my crown over a year ago. I pulled the sash over my chest and took a spin. “What do you think?”
“I think I feel sorry for any girl that had to compete against you.”
Ryan pulled the tiara off his head and gently placed it on mine. “It looks much better on you,” he said, and then stepped back to get a good look at me.
I was surprised by all the butterflies I had in my stomach as Ryan looked me over. He was obviously a little enamored, and I blushed under his gaze. I think he was glad to see it because he grinned and then rather boldly pulled me into his arms. “What do you know?” he whispered in a tone that instantly turned the playful atmosphere to something much more intense. “It looks like I’m going to get my dance after all.”
I may be the poster child for Marvel Comics, but at that moment as he began to dance with me, I was completely powerless to stop him. I wondered for a brief second if maybe my parents were right. What if Ryan really was good for me? Right then I felt normal. I felt better than normal. I felt accepted, wanted. It felt so right to be in his arms. I didn’t say anything, just stood there feeling a little overwhelmed, and the next thing I knew, his lips were almost touching mine.
I’d be lying if I said I didn’t want to kiss him again, and both of us knew it.

Want more of Ryan Miller?
If you've read More Than Jamie Baker already, then you probably have lots of questions. :) If Ryan is crowned King, I'll write a short story (possibly novella length) from his perspective that picks up right where Jamie 2 ends! Ryan will have an adventure of his own in Missing Jamie Baker! I'll also do the cover reveal for Remember Jamie Baker (the final book in the Jamie Baker series)

Haven't read the books yet?

Both books on sale now through the end of the Battle of the Book Boyfriends for just $.99 each at AMAZON & Barnes&Noble