It's november 15th already! I can't believe how fast this month is flying by. We've officially reached the half way point for NaNoWriMo and I'm right on track. I passed the 25,000 mark this morning and thought I'd celebrate by teasing you all with a snippet of this morning's work. Keep in mind this is NaNoWriMo-no-deleting-allowed-first-draft writing...

You ready? Here we go. A teeny-tiny teaser from this year's NaNo project currently titled, The Libby Garrett Intervention.

I was a little nervous as I drove to the Coffee Shop where I was meeting Adam. I wasn’t sure exactly what I’d gotten myself into with him.
I couldn’t figure him out at all. I could have sworn he was the most uptight, self-righteous jerk in Spanish Fork, but Avery loved him and Avery—despite her unwavering fondness for Aiden Kennedy, which, considering their mom’s, I believe to be wholly not her fault—has the greatest judge of character of anyone I’ve ever met.
Not to mention the guy got sexier every time I saw him and holy hell there were several moments in his apartment last night where I thought the sizzling tension between us was going to fry me.
When I pulled up out front of The Coffee Shop he was leaning against the front of the building with a to-go cup in his hand, waiting for me. I almost didn’t recognize him because his coat was covering up his tattooed arms and he had a beanie covering his dark hair. If not for the small metal hoop through his eyebrow I would have thought he was some sexy stranger that had mistaken me for someone else when he peeled himself away from the wall, kicked a skateboard up into his hand, and walked over to my car.
I rolled down my window and he passed the cup through it. “For you,” he said as the smell of hot cider filled my nose. I could smell the hint of both cinnamon and nutmeg and decided I didn’t hate the guy after all.

And there you have it. So far so good. Wish me luck with the rest of it. :)

Any fellow NaNoWriMos out there? How are your projects coming along? I hope you're all having a great time and much writing success!

If you want to friend me, or follow along with my progress, or just learn more about what NaNoWriMo is, here's the link to my NaNoWriMo profile.
Posted by Kelly Oram at 10:29 AM

I've been busy at work writing my NaNoWriMo novel this month, so forgive me if I'm quiet on twitter or a little behind in my emails and whatnot. (My project this year is another contemporary romance, and it's looking good so far.) However, I am taking time out of my writing craze at the moment to share some book news. Ungifted's cover is finally done! I think it's pretty. Hopefully you guys agree. 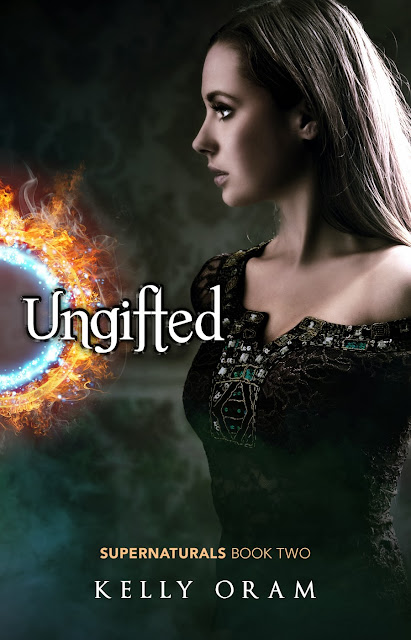 Even though her father is running for President of the United States, Grace St. Claire is as normal a girl as they come. She’s clumsy, shy, and an outcast among her peers. She even manages to nearly die in a freak accident in front of the entire school. But when Grace survives a vampire attack she quickly learns that she is anything but ordinary.

There’s something about human Grace that has all the supernaturals around her going crazy. Her best friend’s brother suddenly wants to date her. Her worst enemy has sworn to protect her even against her wishes. Someone with very powerful magic wants her dead, and the vampire that attacked her has developed an obsession with making her his eternal mate.

In order to survive—and not as Count Dracula’s undead bride—Grace dives head first into the terrifying world of the supernatural. She teams up with a charming but mysterious warlock who strolled into town causing trouble and spouting stories of a Prophesy and Chosen One that looks exactly like Grace. Together they must figure out why Grace is different, who wants her dead, how she’s connected to the Chosen One, and who they can really trust.
Add it on Goodreads

Books in the Supernaturals Series:
Chameleon (Dani POV)
Ungifted (Grace POV)
Scion (Russ POV)
Untitled novella (either Grace or Ethan or both POV)
Untitled book 4 (Girl whose name I haven't decided on yet POV)
Posted by Kelly Oram at 9:18 PM