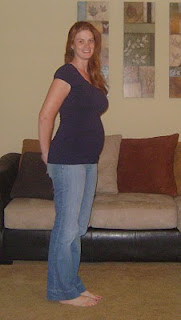 Never say never. No, really. Otherwise you end up knocked up. After my second child was born I said never ever EVER again, and look at me now...

Okay, so there's not much to see yet, but really, I'm' okay with that.
I'm 19 weeks now, (which for me is officially more than half way since I get to deliver early, woohoo!) and I'm just barely starting to show. On the down side, I always feel like I just look fat, but on the up side, maybe I won't gain 60 pounds this time around like I did with each of my first two.

In fact, I'll post two more. One of me from straight on, and how you can't really tell I'm pregnant. I just look like my hips are abnormally wide. (which they so are right now--I swear my butt has gotten bigger than my belly at this point.) And then one where I'm holding my baby bump, trying to make it more obvious... 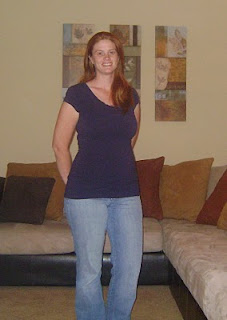 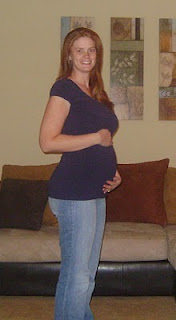 So there you have it. Pregnant pictures. I'll have to post more when I'm further along. I also have a couple of sonogram pictures, but for some reason I can't get my scanner working, so I'll have to wait until my much more computer savvy husband comes home and can help me.
But for now just let me say that it's a bouncing baby boy! And he was an active little squirt during the ultrasound. The technician had a hard time getting a clear profile shot of him because she said he just wouldn't hold still. She said he kept running away from her. He wouldn't let us get a great view of his face either, but he was more than happy to give us the most clear shot of his little you-know-what. Seriously, it's like he was proudly showing off his manhood and then laughing at us. Nice. Such a boy. (I guess he got a couple of Uncle Kyle's genes. Pity. hahahahaha.)
Unfortunately little Oram will most likely never have a first name. Josh and I can't ever pick boys names. (Hence the reason little Josh is a Junior...)  Right now the closest we've got is Ryan, or maybe Jared but chances are we'll be forced to just jot something, anything, down on the birth certificate out of necessity. So, we are open to suggestions if you have any!!!
No, really, we need all the help we can get. The kid is seriously not going to have a name otherwise.

First of all can I just say, wow I suck? I can write until my fingers are sore every day and yet I can't keep up a blog? Maybe it's because I'm supposed to be talking about my life, which is just not as exciting as making a bunch of stuff up.

Anyway, now that that's out of my system.

I know most people usually start getting their kids involved in things like sports when they're around three or something like that, so I'm getting a late start. But my children have never really been all that interested in joining any kind of sport or club. I've offered, but they've always said no. This used to make me sad because I'd hear my friends talking about how they had to take their kid to soccer or ballet or whatever and I'd see all the cute pictures. Then I'd ask my kids if they wanted to learn how to dance or play baseball and they'd always be like, "No, I just want to play with my cars."

Well I was so happily surprised when this year I got the city catalog in the mail and asked the kids if they wanted to do something and they both said yes! We went through the whole catalog and I read them all the classes and sports offered for their ages. It was quite the long process really. Jackie had a really hard time deciding what she wanted to do and changed her mind several times. She wasn't interested in any kind of sport, but she thought twice about a gymnastics class. Then she changed her mind when she heard she could take an art class. This excited her a lot and we thought we'd come to a decision.

Then, ultimately, after years of turning me down, she finally picked the intro to tap and ballet class. (This was largely due to the fact that her cousin Kimberly is taking the class and they could do it together.) I was worried at first that she wouldn't like it. She didn't seem all that excited. But that was before we went and bought the tights. And the leotard... and the little pink skirt... and the tap shoes... and the ballet slippers... Seriously, Jackie gets excited about anything that requires shopping. Add the pink pretty outfit and she was officially THRILLED to be taking dance.

She went to her very first dance class today and she just had soooooo much fun. Her little angel face was just beaming the whole time and then afterward she proudly showed us everything she'd learned in class that day. The child is as graceful as her mother (who has been compared to a three-legged moose) but hey, it just added to her charm! 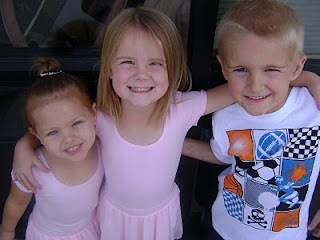 Kimberly and Jackie at their first dance class. Josh insisted on tagging along and watched through the window the entire hour while all the parents present tried to convince him that boys could go to dance class too. And he blushed whenever someone teased him about just wanting to check out all the other girls in their class. It was really cute.

So that's Jackie's story. Josh's was so much simpler. I got through about half of the sport classes in the catalog and then I said the magic word... 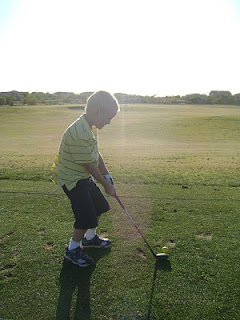 Yup. My little Tiger. I said the word golf and he about fell to the floor with excitement. There was never any doubt of what he wanted to do. He wouldn't even listen to the rest of the classes after that. So I signed him up for his Jr. Golf class that day and he spent a good three or four hours running around like I'd been feeding him Red Bull. He counted down the days until golf for a week and a half. He also spent the next week dressed in his black sunday pants and his solid red collared school shirt. (Because that's what Tiger Woods always wears on the last day of a tournament.) Then, the day of his first lesson he cleaned his room spotless and did all his homework without being asked just to pass the time until it was time to go. (I should have let him start golfing a long time ago!) I've never seen that kid so jazzed about anything.
Then when we got there, it turned out that class had been delayed a week. I thought for sure his little heart was going to break. But the guy at the golf course felt so bad for the 3 kids who hadn't gotten the message and showed up that he gave us each a free bucket of balls to hit the driving range and the putting greens. (Thank heaven for small miracles! lol.) So we took him and Jackie out and let them hit balls for an hour. He and Jackie (who of course insisted on tagging along) had a blast. 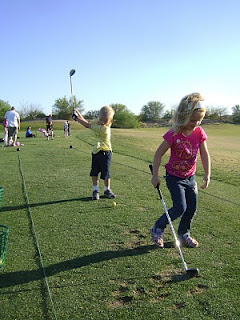 Little Josh managed to hit the ball on the closest green a couple of times. He was quite proud of that. Just look at that back swing! And such concentration. My little Tiger is on his way. 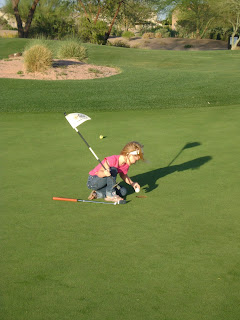 And then there's the way Jackie plays golf...   Jack, you're supposed to hit the ball in the hole, not drop it in!
Posted by Kelly Oram at 11:49 PM